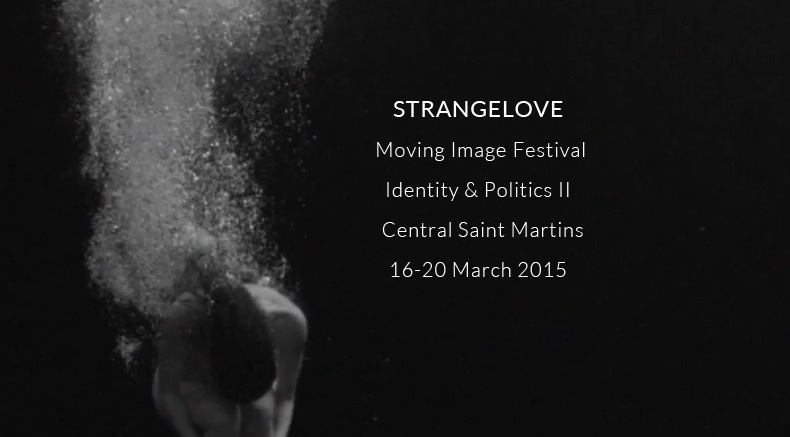 ARTinTRA had the pleasure to be invited to curate a series of short films entitled ‘Identity & Politics II’  for STRANGELOVE: Moving Image Festival. Curated by Vassiliki Tzanakou (Ass curator Marta Cacciavilliani) this series of immersive short films explored through animation, fiction and abstraction the interactions and impacts that contemporary societies could have on one’s identity.

STRANGELOVE is an innovative Moving Image Festival conceived and designed by artist Terry Smith (workinprogress) and curator David Gryn (Artprojx). This first edition has been devised in collaboration with and it will beeld at Central Saint Martins, which in the 1960’s became an important centre for the development of experimental film.

Using spaces throughout the Kings Cross campus the festival programme includes a mix of around 50 screenings, talks, symposia, workshops and exhibitions featuring prominent international artists, designers, directors, screen-writers and performers, aiming to generate cross-disciplinary discussions and draw attention to the way moving image has become an inescapable part of our everyday experience. The festival will celebrate the diversity of moving image practice and explore the relationship between art, fashion, communication design, drama, performance and popular culture. The connection with performance art is also important to emphasis, both art forms share an irregular history.

A full list of festival events can be found on this link: http://strangelove2015.tumblr.com/